On October 1, 2021, The Kindle Book Review announced the Finalists for the 2021 Kindle Book Awards. After naming 20 semi-finalists in each of seven categories, the lists have now been narrowed down to the TOP FIVE books. The top five of the year in the Mystery/Thriller category are listed below, in alphabetical order by title. Good luck to all the nominees. (The Winner will be announced on November 1, 2021.)

Detective Gabriel McRay investigates a cold case from 1988 involving a missing teenager named Nancy Lewicki. Evidence is sparse and Gabriel has no leads. Much to his dismay, a celebrity psychic, Carmen Jenette, hypes the unsolved case on her television show. Gabriel warns Carmen not to interfere. Meanwhile, strange dreams of water and corpses haunt Gabriel’s sleep. They unnerve him as he plans his wedding to LA County Medical Examiner, Dr. Ming Li. When the psychic’s life is threatened, Gabriel connects the dots back to the missing girl and realizes his cold case is burning hot. Someone doesn’t want Nancy found and will kill to keep her hidden.
This is the fourth book in the award-winning series that Kirkus Reviews calls, “A skillfully woven tapestry of subplots and character development” and what The Huffington Post refers to as “frighteningly great.” It stands alone, but if you read one, you’ll want to read all four. Go for it. Gabriel invites you to follow his incredible psychological journey as he evolves from a victim who suffers from rage and depression to an enlightened man who has a chance to lead a happy life.

A DEAD BODY can ruin a vacation. . . .It was a suicide, wasn’t it? . . .Maybe the on-board production of Chicago isn’t the only place people are getting murdered! NYPD homicide detective Mike Stoneman and medical examiner Michelle McNeill just want a relaxing cruise. But, Michelle is convinced that there is foul play at work in the death of a Broadway talent agent’s wife. The ship’s head of security wants to keep it quiet. But, how many bodies can he cover up during one sailing? When it looks like Michelle might be the next victim, Mike needs to find the killer and keep Michelle alive for the end of this Lethal Voyage

A murdered tsarina. A lost musical masterpiece. A stolen Russian icon. Can Jack honour a promise made a long time ago, and solve an age-old mystery?
When acclaimed Australian journalist and author Jack Rogan inherits an old music box with a curious letter hidden inside, he decides to investigate. As he delves deeper into a murky past of secrets and violence, he soon discovers that he’s not the only one interested in solving the puzzle.
Frieda Malenkova, a ruthless art dealer, and Victor Sokolov, a Russian billionaire with a dark past, will stop at nothing to achieve their deep desires and foil Jack’s valiant struggle to uncover the truth.
Joining forces with Mademoiselle Darrieux, a flamboyant Paris socialite, and Claude Dupree, a retired French police officer, Jack enters a dangerous world of unbridled ambition, murder and greed that threatens to destroy him.
On a perilous journey that takes him deep into Russia, Jack follows a tortuous path of discovery, disappointment and betrayal that brings him face to face with his destiny.
Will Jack unravel the hidden clues left behind by a desperate empress? Can he save the precious legacy of a genius before it’s too late, and return a holy icon revered by generations to where it belongs?

The Roach, by Rhett C. Bruno.

Reese Roberts was the guardian of Iron City. Its fearless protector. The only one willing to do whatever it takes… until he was shot on the streets and left paralyzed from the waist down. Now, the vigilante known as the Roach has disappeared. Faded into legend. It’s been years since Reese could take on crime and clean up the streets. He’s a shriveled old drunk, living like a hermit and waiting for his life to end. All that’s left to do is wallow in the mistakes that led him here. To wonder, if he went too far.

But when a copycat steals his suit and takes justice into his own hands, a new killer emerges, leaving brutal messages behind. He wants to eliminate the Roach for good this time. It’s time for Reese to reemerge from his shell and fight back. Who else can stop the flurry of killings? Definitely not the corrupt police department. Iron City needs the Roach again. Only, this time, he’ll need to save it without his legs.

Tears of Fire: The clock is ticking (A Lambeth Group Thriller Book 6), by Gordon Bickerstaff.

Two serial killers have been getting away with murder for years. For them, it’s a well-paid hobby while they bide their time. It’s about to stop when everything slots into place for them to leap to the next level. Payback for the people who killed their parents.

Lambeth Group investigator, Gavin Shawlens, is on their trail. But all is not as it seems and he is pushed way out of his depth when the killers turn on his family. Gavin’s Lambeth Group partner, Zoe Tampsin, is cut off from him and fighting her own battle to stay alive.

They need to connect but Zoe will face an impossible choice. Stop the killers before they pull off the most audacious murder that will shock the world and change it forever. Or, rescue Gavin’s family from the jaws of evil. 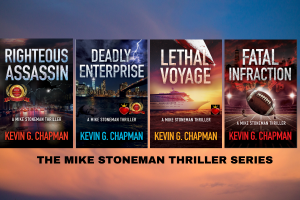