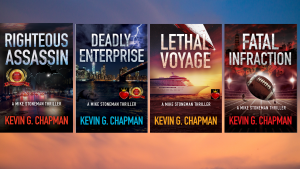 No Romance Allowed is subtitled “a sweet and light-hearted romantic series.” I was not even aware that “clean & wholesome romance” was a category for amazon. This certainly isn’t my usual genre, but the book was recommended to me and this is my honest review. But, I’ll try to approach it from the perspective of someone seeking a “clean & wholesome romance.” It is certainly very light and the lead character, Rory, is sweet in her own way. There is not much romance, so if you’re expecting sex, or even kissing, you’ve come to the wrong place. This is most definitely G-rated.

Rory is an orphan, raised by her Japanese aunt, who has her first job as an accountant after graduating college. Her aunt moved out of the apartment they had shared and moved back to Boston, leaving Rory struggling. She can’t afford the two-bedroom unit on her salary, so she’s unsuccessfully looking for a roommate while she barely has food to eat. Meanwhile, her “witch” boss torments her at the office. She has friends there, but she’s miserable. Rory broke up with her bad boyfriend several months earlier (we don’t really meet him) so she has no current love life. Things start to look up when her elderly neighbor finds a potential roommate for her – a woman coming in from England for six months. Since she’ll pay her rent in advance, Rory is thrilled. But, the woman becomes ill, can’t make the trip, and sends her brother, Peter, in her place. Now, Rory has to decide whether to share her apartment with this strange man.

There are some pretty transparent mistaken-identity-type tropes that allow the plot to meander along and block any hint of romance between the roommates. Peter is obviously rich, but Rory never questions why he (or his sister) would want to share a small apartment with a stranger rather than rent a Malibu beach house. Peter is sweet, clumsy, juvenile, and always willing to buy Rory dinner – as friends. There is an obvious, but very hidden, attraction, leading to the inevitable series of events that . . . well, I won’t entirely spoil it for you. Suffice to say that Peter’s true identity is easy to guess, the events are predictable, and the author provides no plausible explanation for the events, or Rory being oblivious. (Roommates for four months, but they don’t know where the other one works?) The ending provides some artificial suspense fueled by an explanation that is impossible within the geography of Boston. But . . . it’s a light romance, so just go with it.

The 300+ page book could have told the same story in half the pages.  There is an abundance of description of Rory’s daily life, the weather, the traffic, eating meals, her dreary and angst-ridden office issues, and other filler. There are several side-plots that never go anywhere, including Rory’s non-relationship with the handsome co-worker with a dark side that does not lead to any romance (remember, No Romance Allowed), but leads to a throw-away late-story subplot that doesn’t tie into anything. Rory’s co-worker characters are all nice, but lack depth or relevance to the story. Even her terrible boss is very one-dimensional and ultimately of little consequence to the plot. The author gets many of the workplace issues wrong – they are caricatures – but I may be overly sensitive to hostile workplace issues, being an employment lawyer. (But, she also gets the law wrong, which could have been easily avoided.)

The writing is simple and there are plenty of issues typical of a first novel. The text could certainly use a good editor, but it flows along from scene to scene easily enough. The dialogue is stilted at times and includes the syntax of an Asian speaker even for non-Asian characters. Word choices are frequently repetitive and the attempt at first person present narrative results in many tense problems. But, these are all correctable problems that Ms. Wu may well improve upon in future books.

For readers looking for a “clean and wholesome romance,” this one provides very little implied sexual tension or near-romantic moments. But, if you’re looking for a story with no sex or violence, very little tension, and a fairy-tale feel where you don’t want to think too much about the details and just allow yourself to flow along with the story, then this is your cup of Earl Grey tea. Choose carefully, and you may well enjoy a quiet afternoon with Rory and Peter.